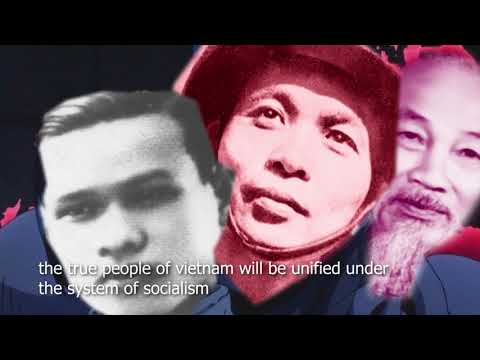 Explanation of the meme:
Layman’s terms:
It’s a reverse Shanghai Massacre (1927) and Russian Revolution combined right before and during the First Indochina War.

In response the Viet Minh “cooperate” with the VNQDD in the name of rebellion against the French oppressors, but do so cynically and with silent manipulation of the opposing nationalist parties. In Lenin like action, the Viet Minh take advantage of the French situation of trying to silence both the Viet Minh and VNQDD to solidify the front against the French under them. They did so by harassing the VNQDD the same time the French were as well as disobeying any directive under VNQDD’s wishes. Over time, they took away liberties, such as using the press, from the VNQDD and rendered them powerless, not that the VNQDD were so organized and powerful to begin with according to US ARMY officer, Archimedes Pattinson in early 1946.

Historically a “crimson king” was a common term for a ruthless monarch, crimson signifying the bloodshed caused by their reign. In the context of the album’s commentary on the Vietnam War, it could be an allusion to prominent political leaders involved at the time like Ho Chi Minh, who lead brutal land reform campaigns resulting in thousands of deaths.

The epithet is also frequently interpreted as a reference to the devil. In this sense, the band may be comparing Vietnam then-war ridden terrain (“the court”) to hell, that being the devil’s domain.

Check out the book for more info:
Victory at Any Cost: the genius of Viet Nam’s Gen. Vo Nguyen Giap by Currey
And check out the website/book End of Empire: 100 days in Asia about the disjointed Vietnamese nationalists weaker than Ho Chi Ming’s cronies:

Last meme:
Run through the Jungles of Burma:
I made Burmese theater of World War II “Vietnam” styled.